Really nice room at the Inn on Mount Desert and we slept very well.

Before going to bed we had a chat with Branden at the front desk who is a wealth of information. We were interesting in moderate hikes in the Acadia NP. He gave us lots of options and recommended we buy a good map in town.

This morning we had breakfast at the Inn. Then headed down to Bar Harbor to the recommended shop called Acadia Shop. They were super nice and helpful and we bought a trail map.

When we came back Branden traced some trail hikes for us and gave Chris verbal information.

There are a lot of trails criss crossing Acadia NP from the Wild Gardens of Acadia so after meandering through the Gardens we decided to do the Hemlock Trail.

Below are a few photos from the Wild Gardens of Acadia.

Time to set off for the Hemlock Trail. We hiked along the designated trail until we came to a fork and a trail marker where we turned in the indicated direction. 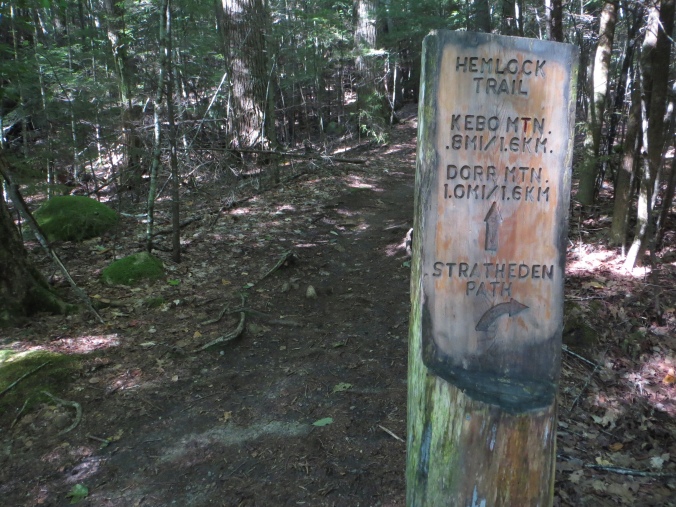 It was pretty easy and we motored right along. After awhile the trail started up over some stairs. It then began to go up even more steeply scrambling over rocks, it kind of felt like a steep creek bed. We began to doubt our trail marker following prowess and stopped to get our bearings.

We were perfectly fine through the stairs and steepness but had been warned about getting on the wrong trail and how onerous it was. That was when we began to doubt ourselves so we turned around back to the fork and went toward the Stratheden Trail. We followed it until it came out on the road then followed the road up to the Gorge Trail where we began hiking again. Soon we came to a juncture that pointed us toward the Hemlock Trail…that was when we realized we had been on the correct trail in the first place! By then it was getting close to lunch and we hadn’t brought enough food for too much more exploring. We followed the Hemlock Trail back down the steep rocks we had already descended back to the trail fork and then back to the car. We had a good laugh!

Drove back to our room and walked to lunch at the Side Street. I had a large lobster salad with an Allagash Black and Chris had large chicken salad with a beer called Juiced.